Although I'm not conducting active research on it, a question that fascinates me is: it is possible to get a transgenic model in a manner as simply as making cell transfection? 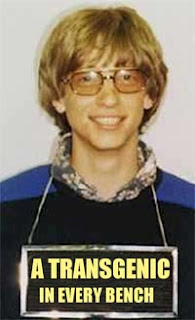 My feeling is that it would be simpler to follow a sperm approach, by 'trasfecting' sperm and then use it for artificial insemination. In a previous post, I wrote about some guys electroporating the testis (ugly!). Now, a letter in Nature open a new perspective, although it is not discussed in the paper. Indeed, Sato et al. took fresh or frozen testes from 2- or 3-day-old GFP transgenic mice and grew some organ slices at 34 °C for about a month in a agarose petri dish with media (alpha-MEM) containing KnockOut serum replacement (KSR), B-27, AlbuMAX, HGF, Activin A, FSH, testosterone, BMP-4 and BMP-7 recombinant proteins, and bovine pituitary extracts. Actually, for the study they took advantage of two different GFP reporter mice as testes donor: Gsg2-GFP and Act-GFP. In vitro, the spermatogenesis looked fine both in terms of meiosis (Gsg2-GFP imaging) and in terms of generation of haploid cells (Act-GFP imaging) and eventually mature and functional sperm was produced. Sperm could be extracted, artificially inseminated in female mice, and healthy pups were generated. I'm sure the technique will further improve and diffuse, as it might be an attractive path for diagnostic and therapeutic techniques for male infertility. By the way, I think having the stem-to-sperm cell in the organ culture to be stably transfected with a foreign gene, could be quite simple to obtain. To make a transgenic mouse you would just need to by some spermfectamine. As Bill is saying, a transgenic in every bench.
--- ---/ link to primary source /--- ---
Sato, T., Katagiri, K., Gohbara, A., Inoue, K., Ogonuki, N., Ogura, A., Kubota, Y., & Ogawa, T. (2011). In vitro production of functional sperm in cultured neonatal mouse testes Nature, 471 (7339), 504-507 DOI: 10.1038/nature09850
Email ThisBlogThis!Share to TwitterShare to FacebookShare to Pinterest
Newer Post Older Post Home